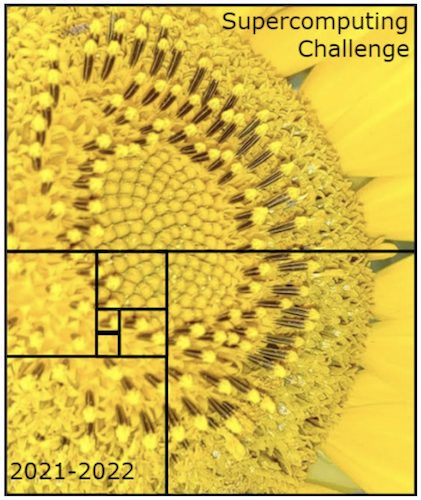 April 26, 2022.  Supercomputing Challenge students across the state have completed their computational projects on topics such as Alzheimer’s disease, datacasting, fire science, and environmental issues. This year the Supercomputing Challenge celebrated their 32nd annual Expo on April 25th and 26th which featured student final presentations, judging and an award ceremony held on a virtual platform for the third year.

David Kratzer, the executive director of the Supercomputing Challenge, states that “I am always impressed with the students in our state.  We are so proud to be able to show their abilities.”

By participating in the Challenge, students learn to be prepared and successful in any career. They learn to be persistent by practicing their computer programming skills, completing research, and meeting deadlines to cross the finish line. The Challenge likes to refer to itself as an academic marathon, and these students should be recognized as critical thinkers, communicators, collaborators, and computer scientists.

Scholarships worth $19,2000 were awarded to participating students planning to enroll in New Mexico Tech, the University of New Mexico and Central New Mexico Community College. Many other awards were distributed ranging from $50 per team member for finishing the academic marathon to team prizes of up to $1000 for 1st and additional prizes for other categories such as teamwork, technical writing, programming ability, and community impact.

The Supercomputing Challenge is open to all New Mexico middle and high school students, including home-schooled students.  Students work in teams and follow their own interests to choose a topic to computationally model. New students interested in becoming involved can make plans to start the next academic year, by contacting consult@supercomputingchallenge.org

The top three finalist projects are:

View all the final reports and videos at: supercomputingchallenge.org

The Supercomputing Challenge is sponsored by the New Mexico Consortium.