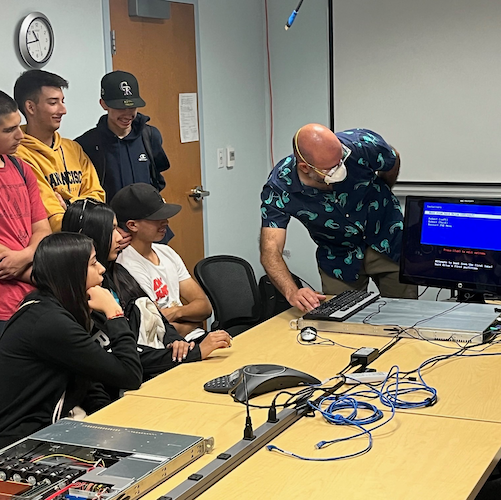 The NMC has been coordinating this effort with the North Central Region of New Mexico Mathematics, Engineering, and Science Achievement (NM MESA), a pre-college program that prepares New Mexico students for college and careers in mathematics, engineering, science or technically related fields.

On September 21st, 21 students from the Monte del Sol Charter School came to the New Mexico Consortium where they attended a presentation and were given a tour of the NMC’s server room facilities. Omar Contreras, the NMC Director of Information Technology, met with the group to talk to them about servers and server rooms, why the group is receiving these servers, expectations for what they can do, how the NMC can help in the future, as well as a question and answer session.

Last, the student group were given the computer nodes and various tech equipment to take back to their school.

These machines have now been re-purposed for the 4th time. They were first used by LANL HPC, then the PRObE project, then the NMC and now the students of Monte del Sol will have a turn!  Contreras says, ” It was really cool to participate and see that those machines can now be used and avoid being salvaged for a few more years.”

While the nodes were part of a larger cluster while in use at the NMC, they can be run independently of one another. The students will use them to learn about hardware and operating systems, and they’ll be able to install them with services ranging from web servers, and file servers, to other numerous services and configurations with the purpose of learning about IT infrastructure, computer science and computers in general.

The students will work with their school’s IT department to figure out the challenge of properly storing and cooling the 10 nodes. The NMC is committed to help if necessary.

As a part of NMC’s community outreach efforts, this initiative could be expanded on multiple levels. In the future, interested students could work at the NMC to assist with various server room tasks. The NMC could develop modules for students to coordinate with each other. For example, it could be advantageous to have a portal where all students can interact and resolve situations they encounter but also motivate other students by showing what they’ve done with the nodes given.

Nicholas Kunz, the North Central Region Coordinator of NM MESA comments, “We are grateful for the expertise that Omar Contreras and his staff at the New Mexico Consortium have shared with NM MESA students. We were inspired by the hands-on learning opportunities provided in the workshop and it was particularly valuable to hear their stories of success on the path to a great career in the world of computer science. The learning will continue with the gracious donation of the hardware to be used at the school site, and we look forward to more collaboration in the future!”