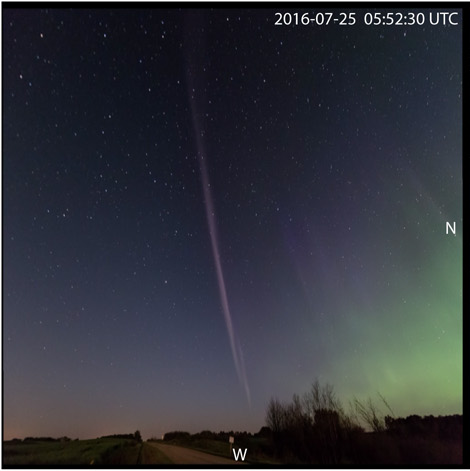 The STEVE/Aurorasaurus team, led by Liz MacDonald, a space scientist at NASA’s Goddard Space Flight Center in Greenbelt, Maryland, studies the northern lights or aurora borealis by gathering information through aurora related tweets and observations reported via the Aurorasaurus website or app. The research team uses this verified citizen scientist gathered data by comparing their location with the modeled auroral ovals. In 2018, this team published “New science in plain sight : Citizen scientists lead to the discovery of optical structure in the upper atmosphere” in the journal of Science Advances. The new type of celestial phenomenon, first discovered by aurora enthusiasts, is called Strong Thermal Emission Velocity Enhancement or STEVE, and is a ribbon-like aurora in structure. In the year since, the paper has generated 10 citations and an Altmetric score in the top 5% of all papers, indicating its broad appeal and influence worldwide.

MacDonald said “It is wonderful that this award recognizes some folks who were not co-authors on the original ground-breaking paper but nonetheless have made critical contributions: Michael Cook, Song Despins, and Kasha Patel.” This includes 2 former New Mexico Consortium employees, and one additional citizen scientist.

Beginning in 2008, the NASA Goddard Space Flight Center developed the Robert H. Goddard Awards to combine its former Awards of Excellence and the Goddard Honor Awards. The objective of the Exceptional Achievement Award is to recognize individuals and teams who make significant contributions to the performance of the Goddard Space Flight Center’s mission, which aid the Goddard’s scientific, technical, and institutional capabilities, and enhances mission performance. Accomplishments must be significantly above job expectations as demonstrated by its significance, creativity, or uniqueness, and often exceptional performance sustained over a significant period of time. The scope and significance are to be determined relative to the skill group and grade level of the nominee’s peers, or in the case of teams, similar team activities.

The Goddard Award is named in honor of Robert Hutchings Goddard, pioneer in the field of rocketry. In 1926, Dr. Goddard’s first liquid fuel rocket was launched in Auburn, Mass. Larger scale experiments and a skeptical local government made it necessary for Dr. Goddard, who was to become recognized as the father of the United States space program, to move to New Mexico in 1930. There, he carried on a major series of tests until 1942, at which time he was called to Washington as Chief of Navy Research on jet-propelled planes.

NASA will present this award to the STEVE/Aurorasaurus team at the 2018 Robert H. Goddard Honor Awards Ceremony to be held on Thursday, May 16, 2019 at 10:00 am in the Building 8 Hinners Auditorium.  Light refreshments will be served.