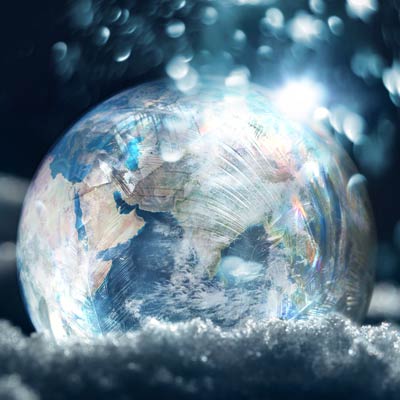 When lasers lase, they create heat that not only has to be removed by a cooling system but also limits their maximum power. Radiation Balanced Lasers (RBLs) are a special class of solid-state lasers that realize the lasing action inside a material that is also an optical refrigerator. In solid-state optical refrigeration, the material cools when it is excited by laser light and subsequently fluoresces. This cooling effect is achieved when the laser is tuned such that its energy is lower than the mean fluorescence energy. The respective small energy difference is extracted as heat from the solid and carried away as light, cooling the solid in the process. By combining lasing and cooling in the same medium it is possible to exactly offset the heating induced by the lasing by the cooling provided by the optical refrigerator, resulting in a solid-state laser with net zero internal heat generation. Such an RBL does not require external cooling. It can be scaled to much higher powers than conventional solid-state lasers as its lasing properties are not degraded by thermal gradients. RBLs will enable high-power lasers for science, manufacturing, and military applications.

Markus Hehlen and collaborators are developing RBLs as part of a Multidisciplinary University Research Initiative (MURI) project funded by the Air Force Office of Scientific Research (AFOSR) [1]. At the heart of an RBL is an optical refrigerator crystal that has to be of exquisite purity and optical quality in order to provide efficient laser cooling. Fluoride crystals such as lutetium lithium fluoride (LLF) that contain a small amount of ytterbium ions (Yb3+) are particularly attractive for this application. Hehlen and collaborators have recently used such crystals to demonstrate the first all-solid state optical refrigerator which cooled an infrared sensor to 135 K [2]. Hehlen and Azzurra Volpi, a postdoctoral researcher at the University of New Mexico, are growing ultrapure fluoride crystals using a custom-built Bridgman crystal growth system at LANL. This technique allows for the relatively rapid growth of high quality crystals, allowing them to explore the parameter space quickly and optimize the RBL performance of these materials.

← Back to Research Page