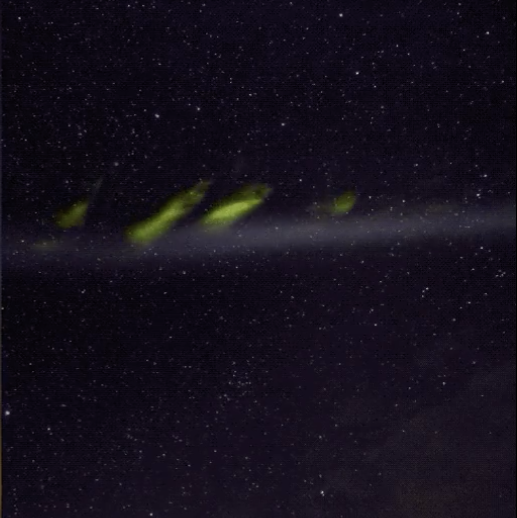 STEVE is made up of two very distinct elements. The first is a purple or whitish arc extended in the magnetic east–west direction and the second are green emissions next to to the arc, often structured into picket-fence like columns that line up with the geomagnetic field.

In this publication, to establish the altitude range and identify these features, the scientists extensively used photos and videos captured by citizen scientists.

The researchers share their latest findings on STEVE’s small green picket-fence like streaks, with the hopes of learning something new in how green auroral light can be produced. The streaks could be points of light that are moving and thus appear elongated in the images. The researchers noticed that the tip of the streak in one image will line up with the end of the tail in the next image, contributing to this speculation.

The researchers say that STEVE’s purple emissions are probably the result of ions moving at a supersonic speed. They also state that the green emissions appear to have the same behavior as eddies, as seen forming in a river, moving more slowly than the other water around it. The green features move more slowly than the structures in the purple emissions. They speculate that this could be caused by turbulence in the space particles at these altitudes.

This paper chips away at a better understanding of the STEVE phenomenon. There are still many questions to be answered.

To read the entire publication see: The Mysterious Green Streaks Below STEVE.

Photo by Neil Zeller, one of the authors of the paper.