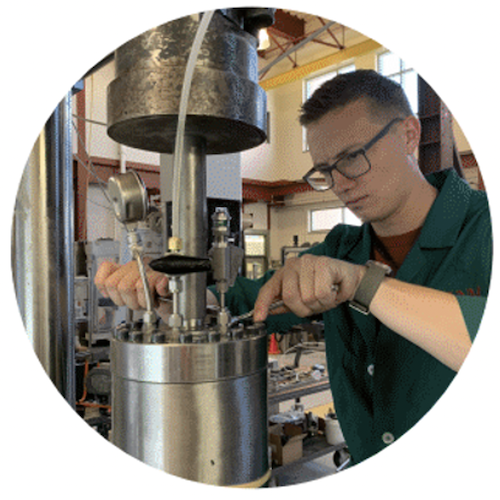 This was a three year collaborative project between Los Alamos National Laboratory (LANL), via the Center for Space and Earth Sciences (CSES), and the University of New Mexico’s (UNM) Department of Civil, Construction and Environmental Engineering. Collaborators on this project include Earl E. Knight, a LANL scientist, John C. Stormont and Mahmoud Reda Taha both from the University of New Mexico. The project started in the fall of 2017 and ended December 2020, establishing an integrated program that united world-class theoretical and modeling capabilities at LANL with state-of-the-art experimental capabilities at UNM.

The project had two main focuses: experimental and computational/numerical analysis. On the experimental side laboratory experiments were conducted on rocks samples at UNM facilities to allow for the characterization of material models for damage, fracture, and flow through cracks. These models were evaluated and utilized within an existing LANL computational geomechanic’s software.

The experiments allowed analysts to establish a definitive connection between damage or fracture and permeability enhancement in rocks. For the computational aspect, LANL’s computational geomechanics software, the Hybrid Optimization Software Suite (HOSS – www.lanl.gov/hoss) was utilized, as well as the Laboratory’s High Performance Computational platforms. HOSS is a code based on the combined finite-discrete element methodology and was developed to study fracture and fragmentation around underground explosions placed in a wide variety of rock media. Since its inception in 2004 HOSS has been extended to many other fields of applications, such as grain scale mechanical response of cementitious materials, reproduction of laboratory scale experiments for rocks and metals, simulation of hydraulic fracture processes, modeling of dynamic seismic rupture processes, and the study of hypervelocity impacts on both consolidated and unconsolidated materials. The investigation conducted in this project enhanced LANL’s capabilities to predict damage, fracture and resulting permeability changes in geologic materials. By the end of the project the HOSS code was further verified and validated for these type of applications. 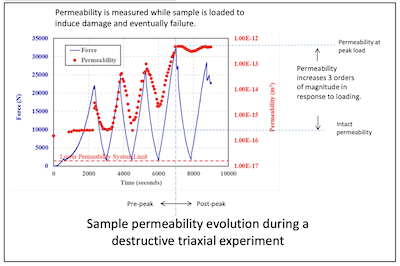 The Large University Project was very successful both in terms of the technical work that was conducted and also because it provided a direct conduit for UNM students to be exposed to the Laboratory’s work environment, which in turn allowed the team to recruit valuable young home-grown NM talent. The technical work achieved is invaluable for it establishes connections between the damage suffered by the rock samples and the changes in their permeability, which are key for many subsurface-based activities such as oil and gas extraction, CO2 sequestration, geothermal energy production, and underground nuclear detonation detection, just to name a few. Establishing the link between permeability and damage will allow more efficient and realistic design of methods for energy extraction (e.g., hydrofracturing, enhanced geothermal stimulation). Rock often provides isolation between stored or disposed of materials and the environment (e.g., hydrocarbon storage, nuclear waste disposal); better understanding of permeability changes in the rock surrounding these facilities will lead to improved confidence in our ability to design and operate these facilities in a manner that protects the environment.

Perhaps more importantly, the hiring of talented young staff, trained by UNM and LANL staff, provides LANL a unique opportunity to train a new generation of personnel to take on the challenging National and Energy Security problems the Country faces. This project involved three staff members from LANL and two UNM professors and their seven master students. The project provided an invaluable conduit for some of the best and brightest Northern New Mexico students to gain experience working at a DOE National Laboratory. Students who progressed through this composite program are well-prepared to provide key contributions either to LANL or the commercial workforce. It is worth noting that three of the students that participated in this project have been hired at LANL. The first student, hired in the fall of 2019 was recently converted in the summer of 2020 as a staff member. The other two students are in the process of being hired as post masters.

This program’s success only resulted due to the funding that came from the CSES and the New Mexico Consortium (NMC). The NMC provided not only part of the economic support for each of the three years, but also provided housing for the students during the summers so they could spend time working at the lab.

In addition, UNM’s School of Engineering leveraged additional student support to ensure the project had a critical mass of resources. This program’s successful enterprise demonstrated the enormous potential that exists in partnering the resources of our National Laboratory with the infrastructure and human talent that resides here in our New Mexico Universities.

Both the LANL and the UNM personnel involved during this project would like to thank the CSES and NMC for their support and insight. The unique opportunity to be involved with a next-door academic establishment and the training of a next-generation of Laboratory talent cannot be overstated.