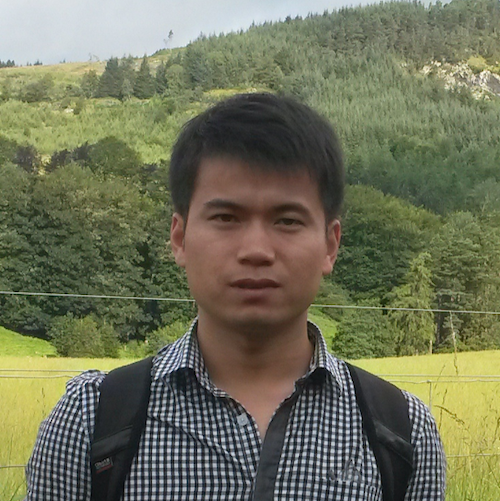 Feiyu Li, a scientist at the New Mexico Consortium (NMC), recently presented his work on Alfven wave physics and Laser Accelerators at both the MagNet US 2022 meeting and at the 49th International Conference on Plasma Science.

Li’s first presentation titled, On the requirements for observing Alfvén wave parametric decay instability in a laboratory plasma, was given at the second annual MagNetUS 2022 meeting. This meeting was held June 7 – 10, 2022 in Williamsburg, VA.

MagNetUS is a network of magnetized plasma experimental facilities with the shared goal of studying basic plasma science in a collaborative, inclusive environment.

Li’s presentation focused on work done at the NMC and was a collaboration with Xiangrong Fu of the NMC and Seth Dorfman from the Space Science Institute.

To summarize this presentation: Parametric instabilities are an important class of nonlinear Alfvén wave dynamics. Of the various instabilities, the parametric decay instability (PDI) has drawn special interest as it produces backward propagating Alfvén waves which may trigger plasma turbulence and generates compressible waves which may cause strong plasma heating. Despite the significant implications and the fact that PDI was predicted half a century ago or so, observational evidence of individual PDI events has been scarce both in space measurements and laboratory experiments. Motivated by previous Alfvén wave experiments in the Large Plasma Device (LAPD) at UCLA,  this study looks at experiments to achieve the first quantitative measurement of the fundamental PDI process. The presentation discusses the relevant LAPD conditions required for these new experiments. Making use of novel hybrid simulations, Li and colleagues outline the parameter space for effective excitation of the PDI, augmented by simple theoretical considerations. Together with further experiments, these simulations would provide unprecedented details about the basic PDI physics and may represent a powerful tool for investigating other LAPD experiments beyond PDI.

Feiyu Li also gave two invited talks at The 49th IEEE International Conference on Plasma Science (ICOPS). This conference, held May 22-26 in Seattle, WA, covers both traditional areas of plasma science and new exploratory research areas. The conference offers an outstanding forum for scientists and engineers to learn about some of the most significant advances in plasma science and technology in recent years and discuss future research directions.

This work took place at the NMC  with colleagues Xiangrong Fu of the NMC and Seth Dorfman from the Space Science Institute.

Nonlinear Alfvén waves are subject to parametric instabilities. The parametric decay instability (PDI) is of special interest as it produces backward propagating Alfvén waves which may trigger turbulence development and generates compressible waves which may cause plasma heating. Despite the significant implications, the PDI process has not been directly verified. Recent experiments on the Large Plasma Device (LAPD) showed a modulational-like instability. However, the PDI was missing despite its significant growth rates under the conditions investigated. To resolve the puzzle, Li and colleagues are developing hybrid simulation capabilities to investigate the LAPD-type experiments with realistic geometry and physics conditions. As a first step, they relax the usual periodic boundary conditions and study the PDI of an Alfvén wave packet in a large system under an absorption boundary. They further consider the LAPD-like wave injection and outline the conditions required for observing the PDI in a laboratory plasma. These results may guide the first laboratory verification of the fundamental PDI physics and shed lights on several problems in the heliosphere such as corona/solar-wind heating.

This work, mainly completed at Los Alamos National Laboratory, was a collaboration with scientists from Colorado State University.

Accelerating charged particles using intense lasers has been actively pursued over the past few decades. Such laser-based compact accelerators have several potential applications including fast ignition, high-energy physics and radiography. Among the several schemes of laser-plasma based electron acceleration, the vacuum laser acceleration (VLA) features great simplicity where electrons are directly accelerated by the intense laser field. However, a grand challenge of VLA lies in how to efficiently load free electrons into the fast-oscillating laser field such that the injected electrons remain within given half cycles of the laser wave and see a unipolar field for continuous acceleration. This requirement necessitates the injected electrons to be pre-accelerated close to the speed of laser light before they are captured and accelerated by the laser field.

In this study, Dr Li and colleagues experimentally demonstrated electron acceleration up to 20 MeV by driving a thin solid plasma in the transparency regime. Numerical simulations and theoretical analyses suggest a new electron injection scheme for VLA based on the relativistic transparency effect, where an initial opaque plasma becomes transparent to the driving laser due to relativistic electron mass increase. When a high-contrast intense laser drives a thin solid foil, the electrons from the dense plasma are first accelerated to near-light speed by the standing laser wave formed in front of the opaque foil and they are subsequently injected into the transmitted laser field as the dense plasma becomes relativistically transparent. This work not only solves an outstanding problem in VLA by demonstrating a viable injection method, but also provides insight into the electron acceleration in relativistically transparent plasmas, which acts as the primary driver for laser-foil based ion accelerators, x-ray sources and relativistic optics.

Feiyu Li is a physicist at the New Mexico Consortium. Previously, he did postdoc research at the Los Alamos National laboratory and the University of Strathclyde (Scotland, UK). He got a PhD degree in Plasma Physics from Shanghai Jiao Tong University (China) in 2015. He specializes in theoretical and computational plasma physics and high-energy-density physics, including high-intensity laser-plasma interactions, accelerator beam dynamics, and fundamental laboratory space plasmas, which have broad applications in advanced accelerators, space science, and inertial fusion energy, etc. Notably, he has investigated several schemes for compact laser-plasma accelerators and novel attosecond x-ray radiation sources. He received the 2015 Tsai Shih-Tung Plasma Physics Award for his thesis work on the generation of attosecond electron and light pulses from laser wakefield acceleration.

In the future, Dr. Li wishes to combine the expertise in both laser plasmas and magnetized plasmas, and to develop novel concepts and tools that would enable new applications of basic plasma science.