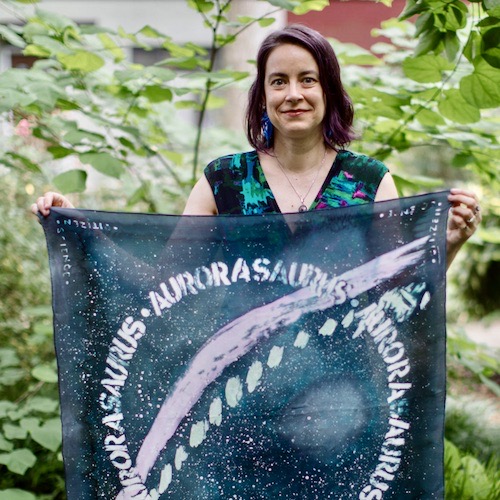 Congratulations to Dr. Liz MacDonald for being featured in Global Women in Science! Dr. MacDonald, a NASA Goddard Space Center Flight Center scientist and New Mexico Consortium affiliate, has been studying the northern lights or aurora for almost 25 years!

Throughout her career as a physicist, she has been passionate about citizen science and outreach and education to the public. She has also led teams that built instruments for NASA and DOE satellite and rocket missions. These instruments measure charged particles in space.

Her Aurorasaurus project is a free platform that tracks the appearance of aurora in real time. Citizen scientists all over the globe use twitter or the Aurorsaurus app to report the aurora, and Aurorasaurus marks a map with the location and time of their sighting. This has been an outstanding success!

With the help of this platform, Dr. MacDonald, aurora hunters, and other scientists have discovered a new type of hybrid aurora called STEVE or Strong Thermal Emission Velocity Enhancement. This new phenomenon looks like an elongated purple arc, and can be accompanied by green lights that look somewhat like a picket fence.

Read the entire article about Dr. Liz MacDonald and other amazing scientists in: Global Woman in Science.