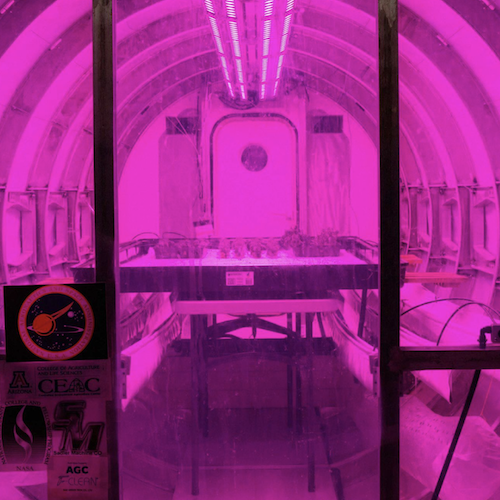 UbiQD, Inc. is featured in Bloomberg Businessweek in an article titled, “How to Grow Better Lettuce…In Space” by Larissa Zimberloff.

UbiQD and the University of Arizona conducted a NASA-funded study to look at whether UbiQD’s quantum dot films could greatly improve the growing outcome of crops grown in space. For this project, they created a prototype lunar greenhouse at the University of Arizona to specifically look at how well the film can convert the ultraviolet radiation in space into light that is nourishing to plants.

How does this film work? The film that UbiQD has created is made from quantum dots, which are tiny particles whose properties can be manipulated so they emit specific colors when exposed to light. In the film, the quantum dots convert sunlight to orange and red light, colors that boost plants’ photosynthetic efficiency. This film has been used in greenhouses to significantly increase plant growth.

Hunter McDaniel, UbiQD’s founder and chief executive officer, says, “I believe that advanced materials underpin every technology advancement in the history of civilization.”  He hopes that in the future, quantum dots will be an essential part of any serious growing operation, whether on Earth or in space.

This research shows that by using UbiQD’s quantum dot films, we can successfully grow food on in space. This increases our ability to survive in space if we can grow food on the moon or even Mars!

Read the entire Bloomberg Businessweek article at: “How to Grow Better Lettuce…In Space“.

The New Mexico Consortium is an early investor in UbiQD and is where the company started. We are proud of UbiQD’s success and their amazing quantum dot products.