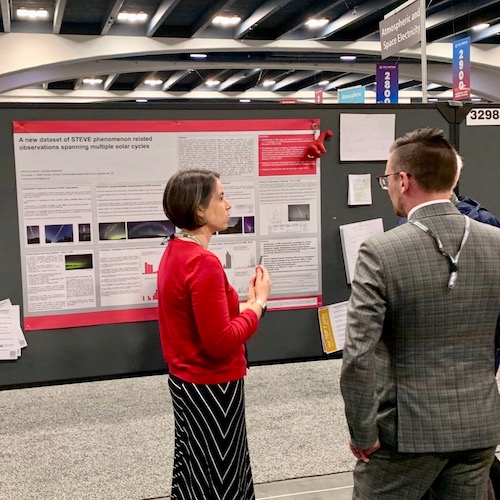 The New Mexico Consortium (NMC) would like to congratulate Elizabeth MacDonald and the entire Aurorasaurus team who are currently attending the 2019 American Geophysical Union (AGU) Meeting held at the Moscone Center, San Francisco, December 9 – 13, 2019. The Auroraurus team had a large presence this year with five oral presentations, three posters, a panel and a film screening!

Aurorasaurus, a New Mexico Consortium project, is the first citizen science project that aggregates sightings of the Northern and Southern Lights in order to improve real-time tracking and understanding of these beautiful phenomena. The Aurorasaurus project allows the public to enter their observations of aurora through a website, as well as on a mobile application platform, in order to better characterize their frequency, location, and visual characteristics.

Out of this citizen science project came the discovery of a new type of phenomenon. Called STEVE, or “Strong Thermal Emission Velocity Enhancement,” it is similar to aurora, but a different phenomenon. It is created by particles traveling along different magnetic field lines than the aurora, and it appears at lower latitudes. The charged particles that create STEVE connect to magnetic field lines closer to Earth’s equator, so it is often seen in southern Canada.

STEVE featured in many of the presentations, including work by citizen scientists. Liz presented a poster of discoveries by Dr. Michael Hunnekuhl, a physicist who has devoted significant volunteer time to researching the phenomenon. A film screening and Q&A of the documentary Chasing STEVE detailed its discovery by a group of aurora chasers. It is great that more people in Space Physics and Aeronomy are now researching the many space physics mysteries of STEVE and contributing to new understanding alongside citizen scientists.

At AGU 2019, the Aurorasaurus project can be found at the following events, scientific presentations and poster sessions:

1. Sunday, December 8th, MacDonald was a panelist in the Student and Early Career Scientist Conference held at the Cyril Magnin Ballroom. MacDonald discussed “Science Technology for Geosciences in the Past, Present and Future”.

3. Monday afternoon was a screening of the film Chasing STEVE, with a panel and question and answer session afterwards.
4. Tuesday December 10th researchers gave three oral presentations at AGU:
5. Wednesday December 11th  MacDonald gives an talk co-authored by Laura Brandt and titled Towards developing appropriate and diverse metrics for citizen science – a case study.
6. And last, Thursday December 12th, MacDonald gives a presentation titled The Stories of STEVE, community science and disruptive innovation.
The AGU conference is only halfway through, and we look forward to more exciting presentations from the Aurorasaurus team! You can follow them on Facebook and Twitter @tweetaurora.