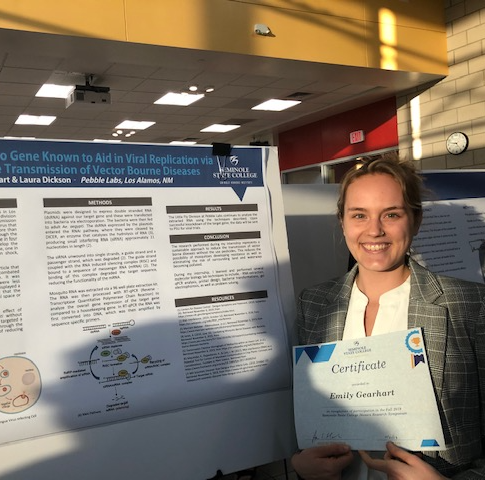 Emily Gearhart, a Seminole State College student who worked as an intern from July – August 2019 at the New Mexico Consortium Biolab, presented her research at the Honors Research Symposium last week. The research symposium was an internal event at the Sanford, FL campus organized by the Grindle Honors Institute and was attended by Seminole State Students and Faculty.

Her poster was titled, Targeting Mosquito Gene Known to Aid in Viral Replication via RNAi to Reduce Transmission of Vector Bourne Diseases. During her time here in Los Alamos, Emily was an intern working with Laura Dickson-Goss and supported by Pebble Labs.

This research focuses on discovering ways to reduce the transmission of the vector borne disease dengue fever, which is caused by an RNA virus and is common in more than 100 countries. Dengue fever is spread from animal to person through the bite of an infected mosquito. In 2019, Penn State University (PSU) published an article that explained how mosquito borne diseases can by combated by Wolbachia, a naturally growing bacterium. Viruses grown with Wolbachia are less effective at infecting mosquito cells and have a reduced ability to replicate.

Emily’s research focused on replicating the effect of Wolbachia on viral replication within the mosquitoes without introducing the bacterium to the mosquitoes. They did this by targeting a mosquito gene known to aid in viral replication through the RNA interference pathway with the goal of reducing the expression of the gene. Data from this research will be sent to PSU for viral trials.

Emily was also featured in the Seminole State College foundation newsletter and awarded a certificate of accomplishment in October by their Board of Trustees for the work she did while at the NMC Biolab.

The NMC is proud to support young career scientists like Emily.