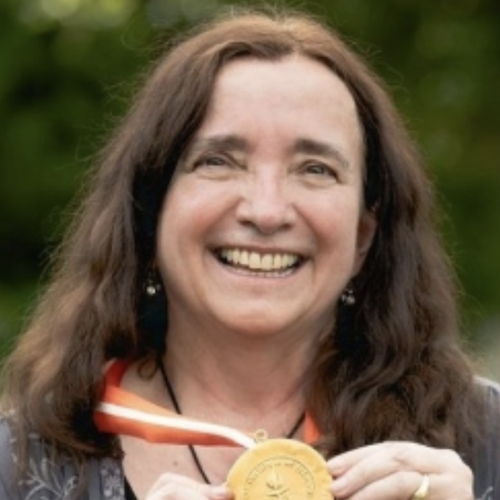 Bette Korber, who received her PhD in Chemistry in 1988 from Caltech is a theoretical biologist and a vaccine designer who first identified the SARS-CoV-2 virus’s evolution.

She is recognized for pioneering achievements in virology research and computational vaccine design, providing hope against diseases such as HIV/ AIDS, and for continuing to equip the scientific community with insights into HIV and SARS-CoV-2, the virus that causes COVID-19.

A scientist at the Los Alamos National Laboratory in the Theoretical Biology and Biophysics Group, Korber is a global leader in the study of how viruses change over time and how vaccines can be constructed to combat them. Her computational strategies have enabled vaccine designs for high- ly variable viruses like HIV, hepatitis C, influenza, and filoviruses, and her HIV mosaic vaccine designs are currently being tested in human clinical trials. She has put this vast expertise in tracking variants to use during the COVID-19 pandemic.

“The SARS-CoV-2 virus continues to evolve, and selective forces favor it becoming more infectious and immune resistant. The evolutionary story of this virus is still unfolding,” she says.

One of Korber’s most significant contributions to that story was to initially demonstrate in spring 2020 that SARS-CoV-2 was, in fact, evolving. She analyzed viral sequences sampled globally and found a more transmissible variant of the virus that was rapidly replacing its ancestral form. Whenever it entered a population, the newer form would soon become prevalent locally; this was happening simultaneously in multiple locations around the world. The ensuing paper, published in the journal Cell in August 2020, has been cited thousands of times, though it initially drew much skepticism in the biology community.

“In early 2020, most of my peers were saying this virus was not evolving,” Korber says. “I felt strongly the data supported the view that it was becoming more transmissible. Now this is well accepted. Fortunately, I had a great team at Los Alamos, and incredible experimental colleagues led by David Montefiori at Duke, who were able to prove what I was seeing through analyses of the sequence data.”

Mathematical modeling has fascinated Korber since before she arrived at Caltech. “Even then, it was understood that our fossil fuel dependency was eventually going to lead to global warming,” she said. “I was a chemistry major, and I wanted to work on ways you could use solar energy to bypass fossil fuels,” which would have involved mathematical chemistry. But she was as- signed to an advisor who had different ideas. “He thought I should do experimental biology because that’s all women could do. He was resolute about this. We argued bitterly about it my first year.”

Korber grudgingly took the biology classes he assigned but found a silver lining: a professor who helped her appreciate the science of immunology. “I had a great teacher, Ellen Rothenberg [Edward B. Lewis Professor of Biology]. Immunology is very beautiful, and she made me want to understand it more,” Korber says. “It turned out to be a good scientific path.”

Around the same time, a Caltech physics student named Brian Warr, a close friend and housemate of Korber and her husband (James Theiler, PhD ’87), became one of the early patients in Los Angeles diagnosed with HIV. His situation played a significant role in her career choice.

“Brian had a magnificent mind and was a wonderful man,” she says. “When he first got HIV, we didn’t fully understand what it meant for him, but we knew that people were dying of this new disease. I hoped that by studying HIV, I could maybe help Brian and ultimately others in his situation. Effective treatment came too late for Brian. We lost him to AIDS in 1992.”

The study of viral evolution and how it impacts vaccine design is transforming, Korber says. The Global Initiative on Sharing Avian Influenza Data (GISAID), which began as a data-sharing hub for influenza sequences, took on SARS-CoV-2 sequences in 2020. GISAID allows researchers to both share and access newly collected viral sequences from all over the world in close to real time. This was a big change from earlier in Korber’s career when the most recent HIV-1 sequences she and others worked with were generally sampled several years, not several weeks, prior. The shortened window enables scientists to define and track newly emergent SARS-CoV-2 variants and re- solve phenotypic changes that might impact public health. For COVID-19, it provides vital information regarding when to shift to a new vaccine component, such as the addition of an Omicron variant to the SARS-CoV-2 vaccines this fall.

“There are over 13 million SARS-CoV-2 sequences currently in GISAID,” Korber says. “To mine this unprecedented wealth of data, we are having to invent the computational tools as we use them. Those of us who do the computational work distill this information for our colleagues, who then test the newly emergent variants experimentally as quickly as possible. It’s an ongoing challenge.”