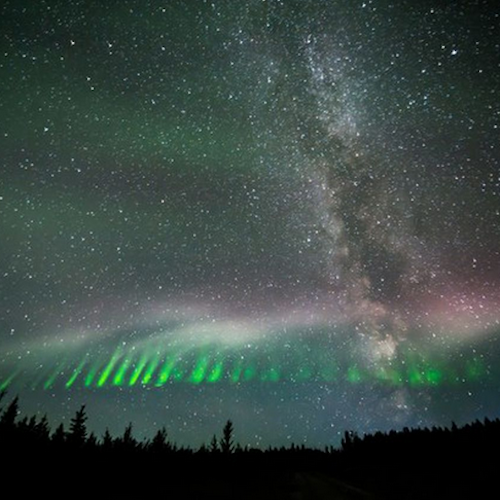 The New Mexico Consortium (NMC) is proud to help promote the release of a new documentary “Chasing Steve” which the Aurorasaurus project has been a part of.

This documentary is about a group of Alberta, Canada night sky photographers who have discovered a celestial phenomenon that has not been previously studied by scientists. These bands of light named “STEVE” (Strong Thermal Emission Velocity Enhancement) are now being studied globally, and this discovery has given rise to many theories and scientific papers. The night sky photographers have even received an award from NASA for their contribution to the scientific discovery!

This Chasing Steve documentary is now being released worldwide, and you can watch it on Vimeo! Also because it is Citizen Science Month, they’re going to offer the film for just $0.99 through the month of April.  The Chasing Steve Online Launch Party + Q&A will take place April 16th, 2020 at 4:00 pm PST / 7:00 pm EST, on Zoom and on social media.

What is Aurorasaurus? This NMC project is the first citizen science project that collects rare sightings of the Northern and Southern Lights in order to improve real-time tracking and understanding of the aurora. The Aurorasaurus project allows the public to enter their observations of aurora through their website, as well as on a mobile application platform

Other Aurorasaurus and STEVE News:

In February, the National Academies released their decadal midterm survey on heliophysics. Aurorasaurus and STEVE achievements are highlighted: “Since the publication of the 2013 decadal survey, citizen science (public participation in scientific research) has become more prominent in solar and space physics. An example of the scientific benefits of citizen science, the discovery of STEVE, was discussed in Chapter 2. Another example is the Aurorasaurus project, a citizen science website where participants report sightings and details of the aurora. The data have been used to improve models for auroral forecasts. Citizen science allows the research community to leverage a large volunteer workforce that can provide a unique set of measurements—for example, those distributed around the globe in the case of Aurorasaurus. In addition, citizen science provides an important outreach tool. It has the ability to engage many thousands of volunteers in scientific research and the potential to inspire new generations of heliophysics researchers.”

In January, Dr. MacDonald gave an interview to Science News Magazine that was used in a February 7 article about the new auroral forms termed “dunes” and the most recent advancements on STEVE research.

Photo of STEVE by Catalin Tapardel taken from the Aurorasaurus blog.