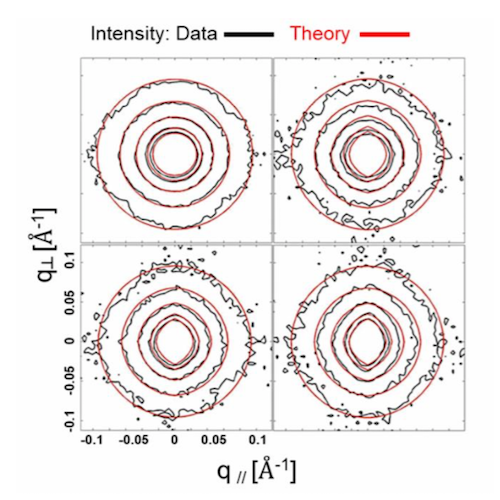 New Mexico Consortium scientist Rex Hjelm recently published his work, a collaboration with colleagues at the University of California Santa Barbara, titled Microstructural characterization of a star-linear polymer blend under shear flow by using rheo-SANS in the Journal of Rheology.

This paper addresses the question of the response of a polymer as forces applied under shear distort it. The picture that results is an average over a large number of molecules that is representative of the average response of a single molecule. When forces or stresses are applied to an object in such a way as to distort its shape/strain, the object exerts a force resisting that distortion. The measurement of materials stress-strain responses is termed rheology.

Why is this important? Polymer materials work under extreme stresses in many critical, practical applications. One example is rubber tires. The design of these types of highly engineered systems is largely empirical. The Holy Grail is to develop models of polymer behavior under stresses that can lead to more energy efficient and safe products.

Rex and colleagues studied a blend containing a simple linear chain, like a snake, and a “star”, like a spider, but with four arms. The inclusion of a star polymer, even in small proportions, confers dramatic changes in the rheological properties of the blend. The purpose of the study is to understand why this occurs.

Tube theory, provides a framework to explain polymer rheology. It supposes that a given polymer chain is confined to a tube of its neighbors. Within this tube the polymer can undergo snake-like motion along the tube, but lateral movement is constrained. With the 4-armed spider this movement is more complicated. When rate of stress is fast, in this case shear stress, the snake-like polymer can still stretch writhe, otherwise move relatively easily with respect to its neighbors or even escape to another tube; but the snakes will tug at the arms of the spider. As a result the spider-like arms will undergo significant distortion, making the stress-strain relationships non-linear. Tube theory must predict the distortion to give a description of this non-linear domain. It has been stated that “structure from rheology is theology”, implying that the theory cannot provide a direct proof of the predicted distortion; something else is needed to do so.

This is where neutrons come in. In this study, the researchers used the technique of rheological small-angle neutron scattering, “Rheo-SANS”, as method for polymer microstructural characterization over stress rates giving non-linear rheological responses. They employed the isotope of hydrogen, deuterium, to label the star polymers, making the stars visible to neutrons against an “invisible” linear polymer background. This gave a direct measure of the distortion of the arms of the spider-like stars from the tug of its snake-like neighbors.

The results of this study showed that tube theory captures significant aspects of the behavior of this complex system to an impressive degree. They also showed that tweaks are needed to provide a more complete picture, providing motivation for further development of the theory.

This complex project required the talents of scattering specialists, mechanical and electrical engineers, as well as rheology and polymer physics experts. Most important are the students and postdocs that do the work.