Measuring Retinal Response in Frogs to Understand the Brain 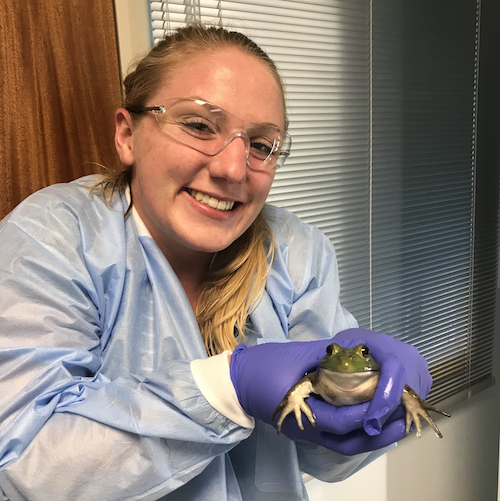 Why do scientists want to measure the retinal response in frogs? The goal of this project is to detect the magnetic field in order to create detailed mapping of brain activity. The retina in the eye is valuable to study because its neurons can be excited with light in a controlled way. Because of this, the dynamic interaction between neurons can be studied.

Electrical currents produce a magnetic field. This experiment measures the magnetic fields associated with the electrical impulses generated by exposing the retina to a flash of light. To carry out this research, bullfrogs are used as the model organism. In this non-invasive procedure, the frogs are placed inside the magnetic shield with the magnetometer. They are exposed to precisely timed flashes of light in order to trigger a retinal response. These responses are then recorded using an ultra-sensitive magnetometer.

Measuring and modeling the dynamic circuitry of the brain is essential for understanding the human brain. However, models need to be validated experimentally. This project will further develop and apply some of the world’s most sensitive magnetic imaging techniques to validate computational neuroscience models over a wide range of length scales and timescales.

This project will have many implications for the future of human brain activity mapping and observing the dynamic interaction of neurons. It is important that this type of basic science be investigated due to its potential for medical imaging and diagnostic applications as well as national security applications.

Disclaimer: Current studies are attempting to measure physiological responses of the retina noninvasively and the frogs are not harmed.