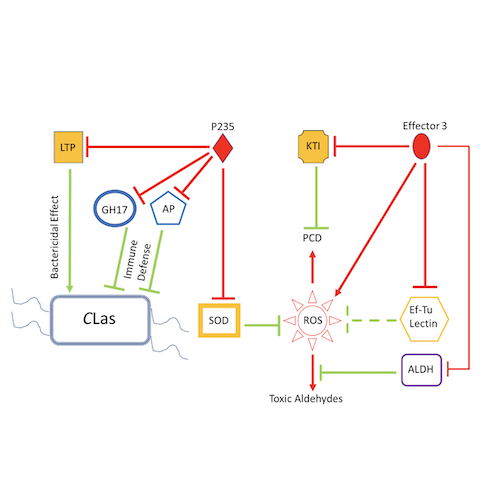 Scientist from the New Mexico Consortium (NMC) have a new publication titled, Two Liberibacter Proteins Combine to Suppress Critical Innate Immune Defenses in Citrus. This publication will be published soon in Frontiers in Plant Science in the Crop and Product Physiology section.

The research takes aim at citrus greening disease, or Huanglongbing (HLB), one of the most destructive diseases of citrus trees worldwide. This work is a collaborative effort between the Gupta laboratory, the NMC, and the Stover laboratory at the USDA Agricultural Research Service.

Citrus Greening, or HLB, is the most devastating disease for orange and grapefruit trees in the United States and represents the greatest threat to the $3.35 billion U.S. citrus industry. HLB is caused by a bacterial pathogen, Candidatus Liberibacter asiaticus (CLas), which is spread by the Asian citrus psyllid. Since the psyllid’s discovery in 1998, the citrus industry has lost 60 percent of acreage and closed about 80 percent of juice plants and packinghouses. The disease, unfortunately, has spread to Texas and California (the other two citrus producing states).

The study focuses on the two putative virulence proteins of Candidatus Liberibacter asiaticus (CLas) that is transmitted by psyllid vectors and causes HLB disease. The standard methods for determining the role of virulence genes of a culturable bacterium is to construct a knockout of a putative virulence gene compare the host pathogenesis in the wildtype and knockout. However, research has shown that this is not possible here because CLas is not culturable.

Dr. Loan Huynh, a Senior Research Scientist at the New Mexico Consortium and Trait Biosciences, states that, “The immune response of plants includes proteins that seek out and kill pathogenic microorganisms. However, some bacteria remain toxic because they have evolved the ability to block these plant defenses. In this study, we used computer simulations to design a mimic of lipid transfer protein that is conserved in many plant including citrus and have shown that the mimic rescues bactericidal activity of the lipid transfer  protein.”

In this study, the researchers have adopted an alternative systems-based approach. First, they identified in vitro the citrus protein interactors of the two CLas proteins by incubating them with protein extracts from infected and healthy leaves, eluting the bound interactors, and characterizing them by LC-MS/MS. Then the researchers validated the presence of these interactors in planta by using a transgenic tobacco line that detects specific interactions between a CLas protein and its citrus target.  Last, they combined in vitro and in planta studies to determine how a single CLas protein may bind and inhibit several citrus proteins in the innate immune pathway, which is first line of host defense against bacterial infection.

Supratim Basu, staff scientist at Washington University and consulting scientist with the NMC, says, “The identification of citrus targets like lipid transfer protein will pave the way for HLB disease therapy by using the protein not only as a bactericidal but also as an immune stimulator.”

Combined effect of the two CLas proteins (P235 and Effector 3) on citrus innate immune defense proteins which clear bacteria, block bacterial growth, and toxicity; shown as green lines.  P235 blocks the functions of LTP (lipid transfer protein), Aspartyl protease (AP), glycosyl hydrolase (GH17), and super oxide dismutase (SOD) whereas Effector 3 inhibits the functions of Aldehyde dehydrogenase (ALDH), Kunitz trypsin inhibitor (KTI), elongation factor Tu (EF-Tu), and Lectin; inhibitory functions are shown as red lines. Among all the citrus defense proteins shown here, only LTP can directly clear bacteria but P235 blocks LTP. Production of reactive oxygen species (ROS) is commonly associated with bacterial infection, which below a critical threshold may provide host defense by being toxic to the bacteria and by inducing defense genes but at level higher than the critical threshold ROS may be toxic to the host. SOD is a ROS detoxifying enzyme, which is again inhibited by P235.  Ef-Tu, Lectin, and ALDH are also ROS detoxifier, but they are blocked by Effector 3.  Effector 3 also inhibits KTI which prevents premature programmed cell death (PCD).  Thus, Effector 3 may kill the host before the bacteria are killed.

Guixia Hao, a research scientist at the USDA-ARS, concludes that, “This research demonstrated the important role of two CLas effectors and identified their targets. We can exploit these targets, especially lipid transfer protein, to enhance citrus resistance to bacterial infection. This finding is important to  develop novel strategies to control citrus HLB.”

The work was supported by the USDA-NIFA grant 59-6034-8-005 (Title: Accelerating Implementation of HLB Tolerant Hybrids as New Commercial Cultivars for Fresh and Processed Citrus).

About the New Mexico Consortium

The New Mexico Consortium (NMC) is an innovative effort to engage universities and industry in scientific research in the nation’s interest and to increase the role of Los Alamos National Laboratory (LANL) in science, education and economic development. This non-profit corporation formed by the three New Mexico research universities focuses on facilitating collaborations at the Laboratory interface.

The NMC leverages capabilities at LANL, universities and industry and provides agile and accountable operations to execute joint initiatives. The NMC develops and manages self-sustaining research facilities to support these joint initiatives. Through the NMC, the universities and LANL have developed more effective models to advance our nations interests and increase the impact of scientific research on the local and national economy.