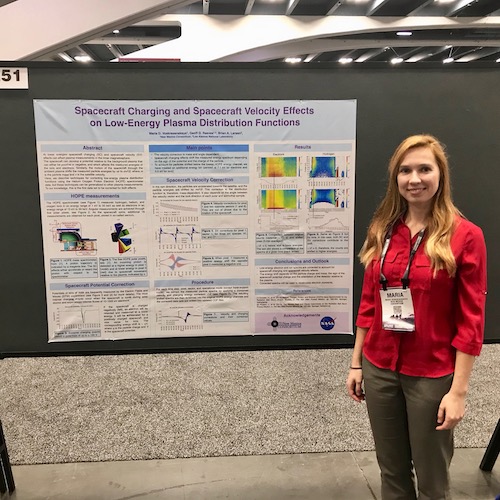 The American Geophysical Union (AGU) Meeting held December 9-13, 2019, took place in San Francisco and featured multiple New Mexico Consortium (NMC) scientists who presented and shared their research findings. The Fall AGU Meeting takes place every December and is the largest international Earth and space science meeting in the world with 25,000 scientists from all over the world attending. Some of this year’s NMC presenters included space scientists Fan Guo, Maria Voskresenskaya and Xiangrong (Sean) Fu.

Modern ground based and spaceborne multiwavelength observations (radio, microwaves, EUV, soft and hard X-rays, and gamma-rays) have provided many details and new opportunities for studying the high-energy particles and emissions in flares. New information from analytical theories and numerical models have been made on magnetic reconnection, turbulence, collisionless shocks, particle acceleration, and chromosphere evaporation reveal a rich set of physical processes. Guo’s talk focused on observation, theory and modeling presentations toward solving this long-standing problem.

Read more about his work at: https://agu.confex.com/agu/fm19/meetingapp.cgi/Session/87885

High energy solar energetic particles (SEP) produced during solar eruptions, such as flares, can propagate toward the Earth and have a significant impact on space assets. But the energization mechanism of these SEPs are not fully understood.

In this research, Fu uses 3D hybrid simulations to investigate particle heating in the highly turbulent low-beta environment near the sun. It is shown that in this regime that the injection of large-scale Alfven waves develops compressible and anisotropic turbulence, which efficiently heats thermal ions of different species. Temperature enhancement of heavy ions is inversely proportional to the charge to mass ratio, similar to typical observations of impulsive SEP events.

Read more about his work at: https://agu.confex.com/agu/fm19/meetingapp.cgi/Paper/628068

Voskresenskaya works with data from the Van Allen Probes spacecraft and studies plasma properties in the inner magnetosphere. Plasma measurements present challenges for a variety of reasons.

While the primary challenge is penetrating radiation, at lower energies spacecraft charging and spacecraft velocity effects can become important. Spacecraft can develop a potential relative to the background plasma that can be either positive or negative. While charging can exceed several kilovolts, the Van Allen Probes spacecraft were designed to minimize charging. Nevertheless, potentials of 10s to 100s of Volts are frequently measured by the Electric Fields and Waves (EFW) experiment. Positive potentials will accelerate electrons and retard ions while negative potentials do the opposite. In either case the measured energy of the ions/electrons will be higher or lower than the actual energy in the background plasma. Therefore, to recover the background plasma distributions, corrections to the energies must be applied.

Similarly, the motion of the spacecraft through the ambient plasma shifts the energies by up to mV2/2, where m is the electron or ion mass and V is the satellite velocity. This correction to the distribution function is therefore mass dependent. While it is insignificant for electrons, for Van Allen Probes, it can be up to 8 eV for Oxygen ions. The correction is also dependent on the angle between the velocity vector and the look direction of each polar and azimuthal sample.

In her poster presentation Voskresenskaya described techniques for correcting low energy plasma distribution functions using the Helium Oxygen Proton Electron (HOPE) spectrometer data. These techniques can also be generalized to other plasma measurements. According to Voskresenskaya, this is the first data set to be corrected for both effects.

Read more about her work at https://agu.confex.com/agu/fm19/meetingapp.cgi/Paper/507998

Above photo of Maria Voskresenskaya next to her poster presentation.

Article and photo by Carrie Talus