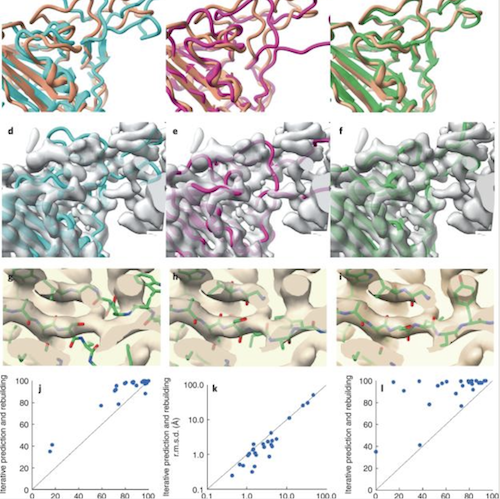 Tom Terwilliger, a scientist with Los Alamos National Laboratory and the New Mexico Consortium, recently published his research showing how to include implicit experimental information in AlphaFold predictions in Nature Methods.

Machine-learning prediction algorithms such as AlphaFold and RoseTTAFold can create remarkably accurate protein models, but these models usually have some regions that are predicted with low confidence or poor accuracy. The authors of this study hypothesized that by implicitly including new experimental information such as a density map, a greater portion of a model could be predicted accurately, and that this might synergistically improve parts of the model that were not fully addressed by either machine learning or experiment alone.

A procedure was developed in which AlphaFold models are automatically rebuilt on the basis of experimental density maps and the rebuilt models are used as templates in new AlphaFold predictions.

The results of this study show that including experimental information improves prediction beyond the improvement obtained with simple rebuilding guided by the experimental data. This procedure for AlphaFold modeling with density has been incorporated into an automated procedure for interpretation of crystallographic and electron cryo-microscopy maps.