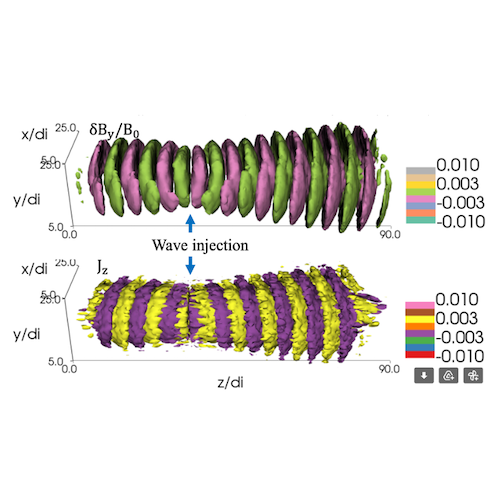 Alfven waves are of fundamental importance in space science, and they are ubiquitous in the solar wind and magnetosphere. Laboratory study of Alfven waves can help elucidate key Alfvenic processes in a controlled manner, that is also useful for interpreting spacecraft data.

Feiyu Li developed his plasma simulation tool to directly study and model laboratory Alfven waves. He based this simulation tool on the Large Plasma Device (LAPD), the primary device at the Basic Plasma Science Facility at UCLA, a national collaborative research facility for fundamental plasma physics.

More details can be found in Li’s recent two publications:

The work is mainly supported by an NSF/DOE partnership program under the grant No. DE-SC0021237.

In the same meeting, Li also gave a presentation on laser-driven compact particle accelerators which is another focus of his research.