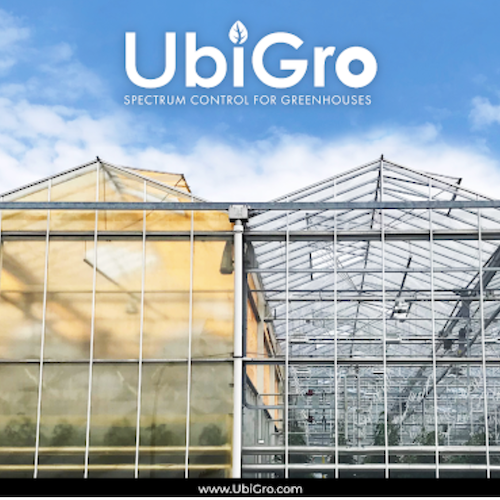 UbiQD, a New Mexico based company established in 2014, is now starting the second phase of their pilot UbiGro greenhouse film program. They are accepting applications from greenhouses across the world to participate!

What is UbiGro and why would greenhouses be interested in participating? UbiGro is a film that uses the nanotechnology of quantum dots to convert UV light and blue photons into longer wavelengths, which results in the emission of orange/red light. This actually harnesses various wavelengths for photosynthesis and the end result is it improves crop yields.

This technology is based on the principle that not all wavelengths are equal, with red wavelengths having been proven as the most photosynthetically efficient wavelengths. Damon Hebert, the company’s director of agricultural research, explained that UbiGro is much more advantageous than other photoselective films and shade nets. This is because UbiGro maintains the light intensity while optimizing the light spectrum, where other conventional methods tend to address one at the expense of the other. Hebert also pointed out that “UbiGro films are electricity-free, whereas modifying the light spectrum by LEDs requires electricity.”

Greenhouse growers interested in participating in the second phase of the UbiGro pilot program may apply using the UbiGro Pilot Program Application.

The New Mexico Consortium is an early investor in UbiQD and is where the company started. We are proud of UbiQD’s success and their amazing quantum dot products.

For more information on UbiGro and the pilot program contact:
Matt Bergren, Chief of Product
sales@ubigro.com