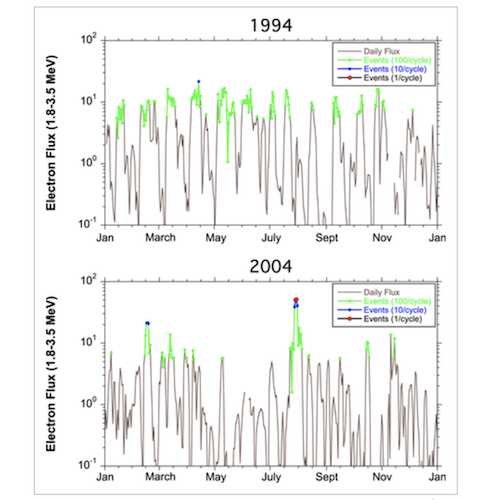 The electron fluxes in the earth’s radiation belt experience periods of rapid enhancement followed by periods of gradual decay. Periods of high electron fluxes are often described as “events” that can last from several days to weeks. However, for multiple reasons, it is difficult to have a standard definition of radiation belt enhancement events. This research hopes to solve this problem.

This paper creates and describes a methodology that can be used to identify radiation belt enhancement events. This paper presents a methodology to define moderate, strong, and intense space weather events based on probability distributions. This methodology then can be applied to relativistic electron fluxes measured by the LANL geosynchronous (LANL‐GEO) satellite instruments.

To read more about radiation belt enhancement events, whey they are important to study, and the methodologies arising from this research, see the entire publication at: Defining Radiation Belt Enhancement Events Based on Probability Distributions.

Figure at top of page: This figure is taken from the paper with caption explaining: “Relativistic electron fluxes in 1994 and 2004 during the declining phases of solar cycles 22 and 23, respectively. Moderate events (100/cycle) are identified in green, strong events (10/cycle) are in blue, and intense events (1/cycle) are in red.”