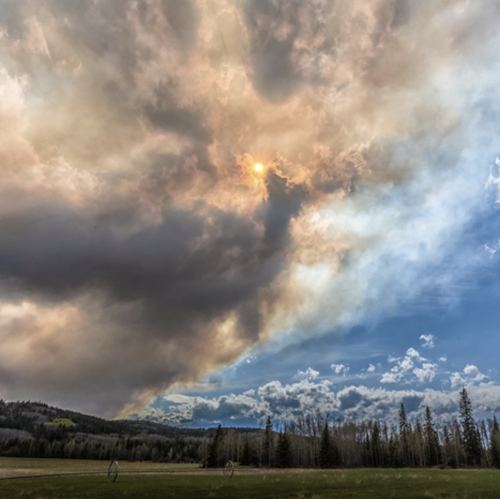 New research recently published in JGR:Atmospheres and supported by the New Mexico Consortium, shows that the impact of particles found in wildfire smoke on climate may be less than was previously thought. This is due to reactions that happen when the plume mixes with clean air, which decrease the climate-warming effects.

In this megafire study, a team of researchers from Los Alamos National Laboratory and New Mexico Tech studied the properties of smoke that came from Arizona’s massive Woodbury Fire last summer. The researchers measured the physical, chemical, and optical properties of ambient trace gas and aerosol concentrations in four large smoke plumes in real time.

They found that the composition of the plumes and the aerosol properties within the plumes were more varied than predicted. When smoke is oxidized more, its sunlight-absorbing potential decreases, thereby reducing its climatic impact.

They also observed more disperse and intact plumes aging over half a day while traveling 300 miles across New Mexico. This led to better understanding how the smoke transforms upon mixing with cleaner air.

This study was financially supported by the Office of Science of the U.S. Department of Energy (DOE), Office of Biological and Environmental Research (BER), Atmospheric System Research (ASR) Program, and Office of Workforce Development for Teachers and Scientists.

Further support was provided by the National Science Foundation, the Los Alamos Laboratory Directed Research and Development program, and the New Mexico Consortium.

To read the entire publication see: