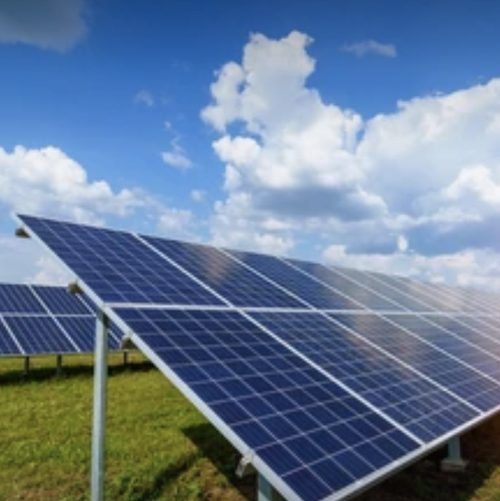 The New Mexico Consortium is proud to announce this year’s winner of the Supercomputing Challenge Environmental Modeling Award.

This year, the award goes to Supercomputing Team 04. The student team includes Lucas Blakeslee, Ian Olson, Val Ornelas and Shrey Poshiya. The teachers involved include Irina Cislaru and Jocelyn Comstock, and mentors for this team are Drew Einhorn and Leon Viveros. This team is a multi-school team whose students hail from Santa Fe Preparatory School, Capital High School and Santa Fe High School.

The team was awarded the Environmental Modeling Award for their project “Optimizing the Geographic Location of Photovoltaic (PV) Panels in the Contiguous US”. The goal of this project was to find the best geographic location for a PV (or solar) panel so that it produced the maximum possible energy. In many ways, the team found this to be a challenge; but, it was also a phenomenal project to work with. The team stated they learned a lot about data collection, data cleaning, and constructing models.

Photovoltaic energy has been at the forefront of our transition to renewable energy, and has the potential to be the primary alternative to fossil fuels. Improving energy panel technology gives it the potential to produce far more energy than it currently does. Photovoltaic farms work best when the conditions are favorable, and problems can arise due to a demand for energy that cannot be met because of overcast weather. This project investigates which region of the contiguous US will solar panels would be the most reliable and produce the most possible energy.

The model that resulted ultimately predicted the energy generation of a 300 watt solar panel in a certain location based off of weather data. The variables used in this project include: Global Horizontal Irradiance (Watts/Meter Squared), Temperature (Celsius), Relative Humidity (Percent), Pressure (Millibar), and Wind Speed (Meters/Second). The results of this project found the latitude and longitude of the point where a singular photovoltaic panel would produce the maximum energy, as well as an overall visual representation in the form of a heat map of the most efficient placement of solar panels. Their results conclude that the best region to maximize PV power output is in the Southwest United States.

The team says that their project can be taken in many directions, using a multitude of other variables and mathematical models. They plan to expand on this project in the future.

The New Mexico Consortium is a proud sponsor of the annual Supercomputing Challenge.