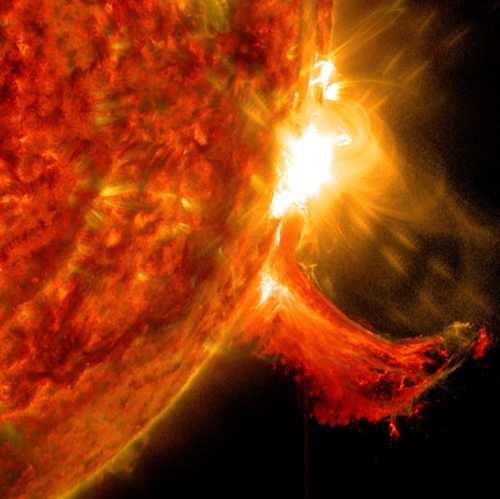 Xiangrong Fu, a scientist at the New Mexico Consortium, recently published a paper titled, Heating of Heavy Ions in Low-beta Compressible Turbulence in The Astrophysical Journal.

Enhancement of heavy minor ions (elements heavier than Helium make up a very small fraction of particles in the solar wind) in flare-associated solar energetic particle (SEP) events remains one of the major puzzles in heliophysics.

Solar energetic particles are high-energy charged particles produced during solar activity in our solar system, which pose threats to human assets and activities in space. The SEP events are usually organized into two categories: gradual and impulsive events. Gradual events are correlated with interplanetary shocks driven by coronal mass injections. Impulsive SEP events are thought to be driven by solar flares. One interesting factor of impulsive SEP events is the enhancement of heavy ion abundance such as the ratio of neon to oxygen or iron to oxygen. Understanding the enhancement is a key step toward revealing the energization mechanism of SEPs.

In this work, the researchers used 3D hybrid simulations to look at particle energization in an environment similar to solar flares. They injected large-amplitude Alfvén waves into the computer model and found that they develop into compressible and anisotropic turbulence, which efficiently heats thermal ions of different species. Turbulence has long been suggested as a candidate for particle acceleration, but it is pointed out by the researchers that compressible turbulence play a major role in the solar-flare environment, contrast to previous studies focusing on incompressible turbulence. Compressible turbulence is featured with enhanced density fluctuations, analogous to sound waves in neutral media.

They further found that the temperature increase of heavy ions is inversely proportional to the charge-to-mass ratio, which is consistent with observations of impulsive SEP events and the power distribution of compressible turbulence.

Link to the picture provided by NASA: https://www.nasa.gov/content/goddard/nasa-releases-images-of-mid-level-solar-flare/