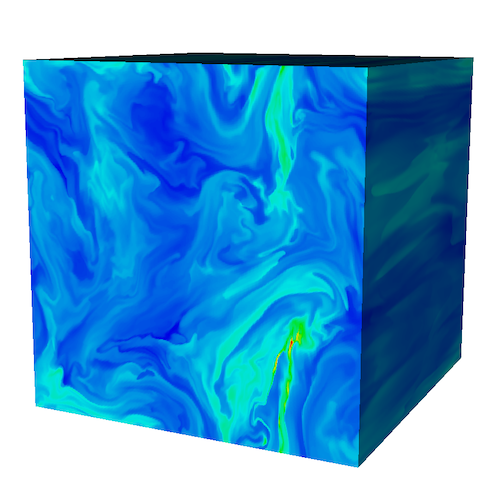 Zhaoming Gan, a scientist at the New Mexico Consortium (NMC) and Los Alamos National Laboratory (LANL), recently published his work, On the Existence of Fast Modes in Compressible Magnetohydrodynamic Turbulence, in The Astrophysical Journal.

This research was completed with colleagues Xiangrong Fu a scientist at the NMC and LANL, along with Hui Li and Senbei Du, both scientists from LANL.

Till now, turbulence is still one of the most difficult and unsolved physics problems. Turbulence can be helpful, for example, it helps you mixing your coffee and milk when you stir with your spoon. However, it can be also harmful and even scary when your jet encounters a strong one.

Magnetized plasma systems, such as the aurora and solar winds in space, are often found turbulent, and magnetohydrodynamics (MHD) is what is usually used to describe turbulence in such systems. To describe the relationship between the limits of weak and strong turbulence, it is important to understand the nature of compressible fluctuations.

In this study, the scientists completed simulations of plasmas to look at how energy is lost at large scales and cascades to smaller scales, and what is the role of propagating waves in turbulence development. For the study they have focused on the fast magnetosonic waves, which are thought important in solar wind models as a potential mechanism of cosmic ray transport.

They used an innovated (though numerically very expensive) way to analyze their simulated MHD turbulence, called spatio-temporal FFT (4D FFT in short). With such powerful tools, they were able to identify propagating waves from turbulence. Interestingly, they found that most of the spectral power is not in waves, instead, energy cascade prefers low frequencies and isotropically along the direction perpendicular to the magnetic fields. They results nicely confirmed some previous theoretical hypothesis about how turbulence develops, while also put caveat to models that rely on waves.

They discussed implications of these new results for both space, such as solar winds, and astrophysical plasmas, such as galactic medium, etc.

Top image of the simulation data that shows the turbulence the research simulated in terms of plasma density.