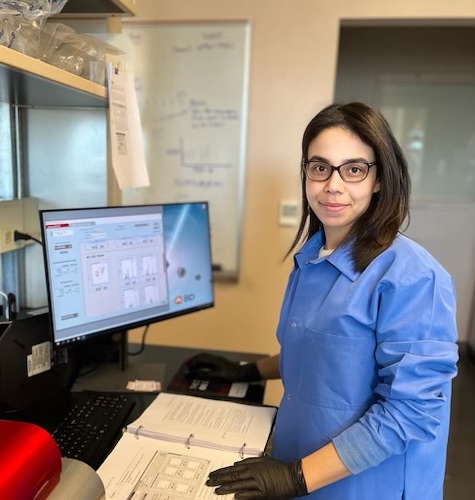 Ahlem Jebali, a scientist at the New Mexico Consortium, recently presented her work at the 2022 Algal Biomass Summit.

The Algal Biomass Summit is an all virtual conference that took place October 2-28, 2022. This world’s largest algal event is where commercial leaders, entrepreneurs, scientists, policymakers, investors, and young innovators are driving innovation forward and building the algae and seaweed economy.

The theme of this year’s Summit was Algae in Action. The focus was on how algae and seaweed cultivation technologies and products can contribute to improving global sustainability today, and how new advances can be leveraged to push technological boundaries even further.

Jebali’s presentation was titled, Phenotypic and genotypic characterization of a field-adapted Nannochloropsis strain.

Phenotypes of microalgae cultures observed during in a laboratory often fail to translate to large-scale algae production systems. This lack of translation may be the result of trait drift and evolution, through time, in response to environmental drivers, including changing weather conditions, pest invasions, and other selection pressures specific to local environments.

In this work, Jebali and colleagues established a field-adapted strain of Nannochloropsis in three laboratories under three different maintenance regimes: storage on agar plates, batch culture, and semi-continuous culture in environmental photobioreactors. The same strain was also cultivated across four geographically distinct field sites in small (~200-300 L) outdoor raceways. Every 6 months after culture establishment, the researchers characterized the strains. For phenotypic characterizations, they conducted common garden experiments and for genotypic characterizations, they used 16S/18S amplicon and SNP/Indel analyses.

Growth of the lab-maintained cultures showed similar growth trends across labs and culture modes, although batch and plate- maintained strains were less productive than the cryopreserved strain and the strain maintained in environmental photobioreactors. The performance of field cultures at three of the four field sites was not significantly different compared to the cryopreserved strain. With respect to biochemical composition, carbohydrate and lipid content were variable but statistically significant and proteins were the major biomass fraction regardless of the lab/site and the cultivation mode. 18S/16S analysis revealed differences in microbial communities not only across outdoor cultivation but also across lab-maintained cultures. The largest difference in microbial diversity was seen across ponds, with one site having the largest amount of diversity (pielou=0.09±.01); the original site from which the cultivar strain was obtained.  Furthermore, flask-maintained cultures have established lab specific microbial communities that differ from the baseline strain.

Continued tracking of phenotypic and genotypic changes over longer time courses will help determine the magnitude and the timescale of trait selection and/or drift in microalgae cultures. From an applied perspective, this work informs culture maintenance practices, with cryopreservation being a gold standard to maintain the integrity of strain traits.