Feiyu Li and Xiangrong Fu Publish in The Astrophysical Journal 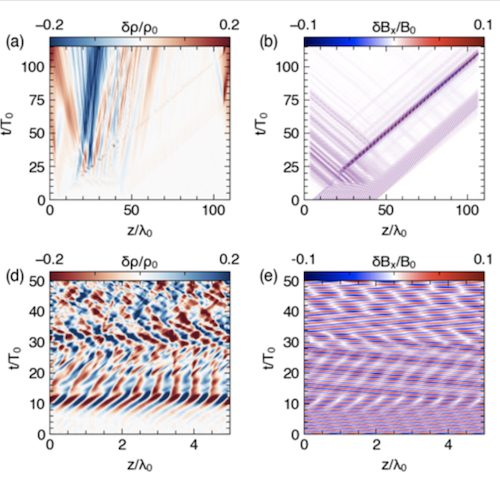 Alfvén waves (AW) are very important in magnetized plasmas. Because they have little geometrical attenuation, these waves may efficiently carry fluctuating magnetic energy over long distances. They play an important role in the energy transport found in space plasmas.

One way to study AWs is through direct spacecraft observations. Another more systematic way may be through controlled laboratory experiments, for example, with the Large Plasma Device [https://plasma.physics.ucla.edu/large-plasma-device]. However, in laboratory experiments, the AW is always launched from one end of the plasma device and is absorbed on the other end. This is in sharp contrast to many numerical modelings using an unrealistic periodic boundary, i.e., waves escaping one end will non-physically re-enter through the other end.

This study looks at how a finite-size AW packet decays in a large-scale nonperiodic system of uniform plasmas. They look at a wave packet of tens of Alfvén wavelengths in size, and examine its nonperiodic interactions with a low-beta plasma over a large timescale. Very different dynamics (upper panel of the figure), as opposed to that in a small-scale periodic interaction (lower panel), is found in terms of plasma density fluctuations and wave decays. The animation above shows the full dynamic process of the nonperidic interaction, featured by strong localized wave decays, density cavitation and ion heating, as well as the emergence of a front portion that is rather stable against propagation.

The results from this study represent a first step toward at-scale modeling of laboratory AW experiments. They may further help to interpret spacecraft observations of AWs, and improve our understanding of the associated energy transport and ion heating.