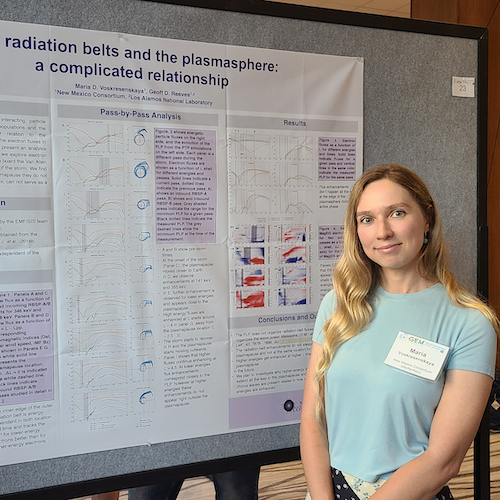 The Geospace Environment Modeling (GEM) program is a National Science Foundation (NSF) Division of Atmospheric Sciences initiative to coordinate and focus research on the near-earth portion of geospace from the lower ionosphere to where the earth system interacts with the solar wind. The purpose of the GEM program is to support basic research into the dynamical and structural properties of geospace, leading to the construction of a global geospace general circulation (GGCM) model with predictive capability. The GGCM effort has evolved into the Global System Modeling (GSM) Research Area. The strategy for achieving GEM goals is to undertake a series of campaigns and focus groups, in both theory and observational modes, each focusing on particular aspects of the geospace environment.

The title of Dr. Voskresenskaya’s poster was: The radiation belts and the plasmasphere: a complicated relationship.

In this work, Voskresenskaya and colleagues analyze the relationship between interacting particle populations in the magnetosphere (the plasmaspheric populations and the magnetospheric radiation-belt populations) and their relation to the plasmapause location (PLP). It is generally assumed that the electron fluxes in the inner magnetosphere are correlated with the PLP. They presented an analysis of the enhancement event on the 1st of May 2013 where they explore electron fluxes measured by the MagEIS and REPT instruments on board the Van Allen Probes at different energies throughout the whole period of the storm.

This research found that while the flux enhancements happen outside the plasmapause they do not happen at the same location for all energies. The PLP, thus, can not serve as a single boundary for all particle energies.

Dr. Voskresenskaya has a Masters degree in Theoretical Physics from Moscow Engineering Physics Institute (MEPHI), Moscow, Russia, and a PhD in Theoretical Astrophysics from the Technische Universitaet Darmstadt, in Darmstadt, Germany. She currently works as a Research Scientist in the Space Science group at the NMC in Los Alamos, New Mexico.