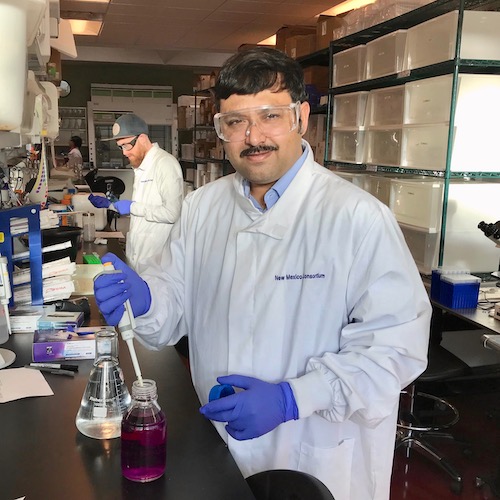 NMC Researcher Shovon Mandal Specializes in Algal Biotechnology. Shovon Mandal, an Associate Research Scientist at the New Mexico Consortium (NMC), specializes in algal ecology and biotechnology. He received his PhD in Agricultural & Food Engineering from the Indian Institute of Technology Kharagpur, where he worked on algal physiology and biodiesel production. Prior to that, Mandal obtained his BS in Life Science and his MS in Botany, specializing in Algology, from Visva-Bharati University.

Before coming to the NMC, Mandal held postdoctoral researcher positions at the Oak Ridge National Laboratory, the University of Michigan and the University of California San Diego, USA. During his postdoctoral tenure, he demonstrated how fundamental principles of ecology can be used in algal biofuel production. He also led the first EPA-approved outdoor field trial for genetically engineered algae and studied their ecological risk at the University of California San Diego. Currently, Mandal’s broad research interests lie in understanding the relationship between algal diversity and productivity.

Shovon joined the NMC in April 2019 and works with NMC Research Scientist Alina Corcoran and LANL Staff Scientist Shawn Starkenburg on the project: Success through Synergy: Increase cultivation yield and stability with rationally designed consortia. Shovon’s research focuses on narrowing down the search for robust algae consortia to be used in outdoor cultivation systems, specifically looking for algae with higher productivity and stability. In his current research, he will employ a functional diversity and trait-based approach to analyze the abilities of different algal strains to perform a variety of functions in field conditions. This research is important because it will help generate an economically viable route for improving algal productivity and biofuel yield.