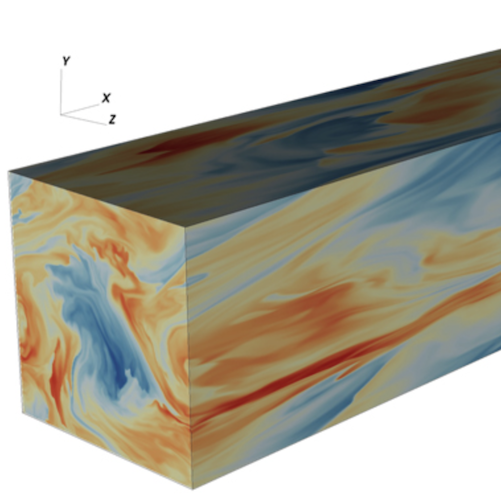 Xiangrong Fu, a scientist at the New Mexico Consortium, recently published his work, Nature and Scalings of Density Fluctuations of Compressible Magnetohydrodynamic Turbulence with Applications to the Solar Wind in the Astrophysical Journal.

The solar wind is a high speed flow made of charge particles with an embedding magnetic field. The flow is also highly turbulent.  Traditionally, people believe that the solar wind is mostly incompressible, like water, and the dominant wave mode is the Alfven wave.  This is confirmed by measurements near 215 solar radii (where the Earth is), far away from the Sun. However, in the solar wind closer to the Sun (<20 solar radii), the magnetic pressure greatly exceeds the thermal pressure (thus plasma beta is much less than unity) and the turbulent flow speed is close to the sound speed. Under these conditions,  the wind is more compressible, like the air, supporting sound waves and producing enhanced density fluctuations.

In this paper, a series of 3D magnetohydrodynamic simulations of turbulence are carried out to understand the properties of compressible turbulence, particularly the generation of density fluctuations. The author of the paper found that, over a broad range of parameter space in plasma beta, cross helicity, and polytropic index, the turbulent density fluctuations scale linearly as a function of the turbulent Mach number (which is defined as the ratio between turbulent flow speed and the sound speed), with the scaling coefficients showing weak dependence on the parameters.

Furthermore, through detailed spatiotemporal analysis, they show that the density fluctuations are dominated by low-frequency nonlinear structures, rather than compressible MHD waves.

These results could be important for understanding how compressible turbulence is generated and dissipated near the Sun.

Above image taken from “Figure 3” in the paper showing density fluctuations.